Prince Jammy as engineer. The Aggrovators making the tracks. It is the Holy Trinity of Jamaican Music. Throughout the years, recorded music has been shaped by some enduring partnerships between producer and engineer, such as Teo Macero and Fred Plautt for Miles Davis, Jerry Wexler and Tom Dowd for Atlantic Records, and George Martin and Geoff Emerick for the Beatles. But possibly none were as prolific as the collaboration between Bunny ‘Striker’ Lee and Prince Jammy at King Tubby’s Studio between 1976 and 1982. In 1977 and 1982 respectively, Conflict Dub and Dubbing In The Front Yard were released in London as white labels in extremely limited quantities. The two LPs found the triumvirate of Lee, Jammy and The Aggrovators in perfect form with driving instrumentals, flashes of vocal beauty and mixes that ripped apart and rebuilt traditional notions of sonic structure. Due to the nature of their limited release (not to mention the lack of artwork and even titles) the two dub LPs quickly disappeared into that mythic realm of records whispered about by only the most hard-core reggae collectors. This release is the first-ever reissue of these sought after LPs, and contains all the original songs in both vinyl form (double LP set with both albums on the original labels) and a lush double pack cd with 3 extra bonus tracks. The sleeve notes are by Diggory Kenrick with amazing photos by Howard Johnson, director of the influential BBC documentary ‘Deep Roots Music’. 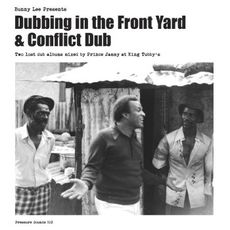