First released in 1991 "Galore" was the final album released by English indie pop group The Primitives during their original years together.

‘ features 12 tracks filled with the signature hooky indie pop sound the group had become known for Highlights include ‘You Are The The Way’,Way’,‘Earth Thing’, and the final single the band released before reuniting in 2009 ‘Lead Me Astray’ 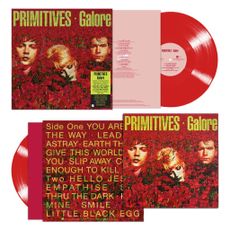