"Robot Hive/Exodus" is the second of initially four albums reimagined and individually curated by a band member, in this case Dan Maines, and reissued as part of the Clutch Collector's Series.

As an extra special element this 2xLP includes a 7" with two tracks: "What Would a Wookie Do?" and "Bottoms Up, Socrates". These two songs were originally among the 16 songs written and recorded for Robot Hive/Exodus back in 2005 but were left off the final album for time purposes. 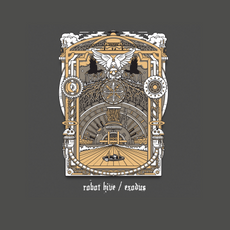