THE Eponymous debut album, now available on vinyl for the first time since its release 20 years ago.

Featuring the haunting hit single ‘Strange & Beautiful (I’ll put a spell on you)’ from the VW Beetle TV advert which launched Aqualung into the world and an additional album of live versions. Matthew Hales aka Aqualung, started as a musician and record producer in the early 2000s. Aqualung’s breakthrough came when his song "Strange and Beautiful” was featured on a television advertisement for the new VW Beetle during the summer of 2002 and went on to become a Top 10 hit in the UK Singles chart later that year. Hales' work has earned him various awards and nominations, including two Grammy and three Ivor Novello nominations. "slow, intricate songs of longing and love" (the Independent) "a guiltless pleasure" (Hot Press) PRESS/ONLINE: “Uniting Radiohead-ish British rock and symphonic pop in the masterly mould of Burt Bacharach, the Beatles and the Beach Boys, tenor Hales delivers keenly focused keyboard-based drama that lows away all pretenders trailing in Coldplay’s wake.” (Rolling Stone) What might result if Joe Jackson ever enlisted Radiohead as a backing group” (Guardian Guide) 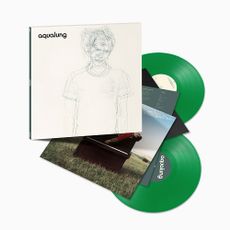 2. Falling out of love

5. Just for a moment

11. Halfway to the bottom

1. Falling out of love

3. Just for a moment

6. Only living boy in New York