SoulMusic Records is proud to present the eight RCA albums recorded between 1977-1985 by the iconic Evelyn ‘Champagne’ King, undeniably one of the primary purveyors of timeless R&B/dance music that helped fuel the disco movement of the late ‘70s and beyond.

While each of Evelyn’s albums has been reissued at different times on CD, this is the first-of-its-kind deluxe box set that includes all eight, with handpicked bonus tracks. Produced by SoulMusic.com founder David Nathan (who has known Philadelphia native Evelyn since 1977), “The RCA Albums” includes stellar essays by two renowned writers: Brian Chin, who contributes an insightiful overview of Evelyn’s years with RCA, complete with 2020 quotes from Evelyn herself and producers T. Life and Paul Lawrence Jones, among others; and Charles Waring who provides an in-depth commentary on each of the eight albums. With superb artwork by Roger Williams and first class mastering by Nick Robbins, this box set boasts (82) tracks that display Evelyn’s pioneering artistry and trace her musical journey to international fame, through a number of signature anthems, establishing a global audience in the process that has made her a consistent, dynamic performer for over five decades.  Disc One: “SMOOTH TALK” (1977) produced by T. Life includes the fresh-as-ever “Shame,” a US Top 10 pop, R&B and dance hit and the follow-up smash ‘I Don’t Know If It’s Right’; expanded edition bonus tracks are 12” Disco Mixes of each.  Disc Two: “MUSIC BOX” (1979), also produced by T. Life, features the US charted hits ‘Out There’ and the title track; expanded edition includes 12” versions of both.  Disc Three: “CALL ON ME” (1980) was initially released in 1980 with the title “Sweet Delight” and different tracks; the original LP was withdrawn and retitled with a new track listing. The expanded edition includes all the tracks from “Sweet Delight” as well as the 12” version of the US R&B/dance hit, ‘Let’s Get Funky Tonight’.  Disc Four: “I’M IN LOVE” (1981) features the US R&B and dance music #1 title track and boasts production work from Morrie Brown with Kashif & Paul Laurence Jones; and the team of Willie Lester & Rodney Brown. Expanded edition bonus track, 12” Dance Mix of ‘I’m In Love’.  Disc Five: “GET LOOSE” (1982) contains two of Evelyn’s most memorable hits, ‘Love Come Down’ and ‘Betcha She Don’t Love You’, both written and co-produced by Kashif; expanded edition includes 12” Version of ‘Love Come Down’.  Disc Six: “FACE TO FACE” (1983) represents a change of style with producers Leon Sylvers and his team and Minneapolian Andre Cymone placing Evelyn in different musical settings; includes the US charted singles, ‘Action’ and ‘Teenager’.  Disc Seven: “SO ROMANTIC” (1984), one of Evelyn’s most diverse RCA LPs, features an array of producers including Carl Sturken & Evan Rogers, Clif Magness & Glen Ballard, Hawk Wolinski ,The System and Jimmy Douglass.  Disc Eight: “LONG TIME COMING (A CHANGE IS GONNA COME)” (1985), Evelyn’s RCA swansong album, reunites her with T. Life and includes production by Hawk; Bobby Watson with Rene & Angela; and the team of Allen George & Fred McFarlane who provided the hits ‘High Horse’ and ‘Your Personal Touch’; expanded edition cuts are a Dance Version of the latter along with two non-album ‘B’ sides, ‘Take A Chance’ and ‘Better Deal’. 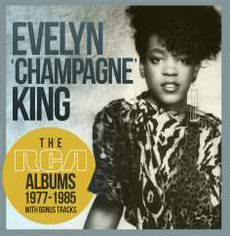