It is the result of a summer night in which they both, a bit drunk and overnight, met at a depot used as a chapel where some nuns formed part of a spiritual act. 'Let's break those wicked's teeth,' said one of them while staring at them gently. Since then, until today, the two masked men have carried happiness and demise to many towns and cities in Spain. A music performance in which the exotic, the demonic and the dreamlike travel together. Pelomono - literally 'monkeyhair' - is Antonio's alias, acquired in his youth for his skill at climbing trees, as well as due to the abundance of his hair which – sadly - no longer exists. The masks origin is peculiar, as both appeared together and one of them - the green one - is a wrestling mask which does not match any of existing fighters, and so we could say with all certainty that it is unique. Antonio's original mask, which came from a gorilla costume, was stolen by some punks in Zaragoza and therefore he had to search for a new one in Amazon. Months later it would suffer a tragic accident, when a band fan saw a chance after one of their performances in Madrid and cut its snout with some scissors, leaving it useless. 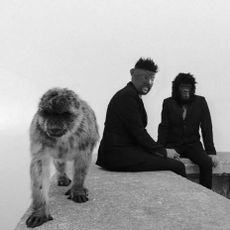