A 21st century piano trio who continue to exemplify the spirit of exploration in their sound, if the critically acclaimed albums ‘And Above All’ (2017) and ‘Give Space’ (2018) prove anything, is that Steiger is not just a band, but a continuous work-in-progress. WHITE/BLUE MARBLED VINYL. Player link: https://public.newsnv.be/ext/promoplayer/7bb8e41fe4658c8cbbe0746700a1d277 On ‘The New Lady Llama’, Gilles Vandecaveye-Pinoy (keyboards), Kobe Boon (bass) and Simon Raman (drums) eagerly explore the outer margins of jazz and dive into other universes (contemporary music, electronica, pop, free improvisation), yet remain faithful to the genre’s long-standing core principle; that of a flexible transformation. Winners of the 2017 Gent Jazz Festivals’ Jazztalent award, Steiger were one of twelve acts asked to perform at the prestigious 12 Points Festival in Dublin in 2018 and recent residencies at Vooruit (Ghent), Flagey (Brussels) and deSingel (Antwerp) have allowed the band the opportunity to incorporate new ideas into the music including prepared piano, harpsichord and synths. Collaborating with Australian contemporary electronic and avant garde composer Joe Talia (Oren Ambarchi, Jim O’Rourke), Talia was granted the freedom to remodel/remix the material that the band designed during their residencies. The end result: an electro-acoustic exploration that blurs boundaries. ‘The New Lady Llama’ is the next step in Steiger’s fascinating evolution as the trio continue its path of renewal and enterprise. Tracks like new single ‘Lambda’ display a stronger emphasis on sound exploration. Steiger are not afraid to experiment with off-kilter sounds and atmospheres as they seek to explore unfamiliar territory. Striking is also the increased use of contrasts. The music keeps construction and deconstruction, form and abstraction, in a remarkable balance. ‘Just A Rite’ for example is full of rapid twists and turns taking something straightforward and turning it on its head with stunning results. Elsewhere, ‘Sun Dog’ and ‘Absolution of a French Fry’ muddy the confines of the organic and the electronic resulting in something deeply cohesive and compelling. 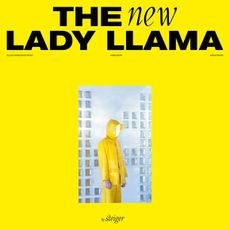