This album will see Barrie-James take on a new light with an Alternative Country vibe.

‘Strange Desire’ will also feature the stunning track ‘Riverside’ which features Lana Del Rey. Barrie-James’ connection with Del Rey goes back years. In 2013 he recorded a duet with her of the Lee Hazlewood and Nancy Sinatra standard ‘Summer Wine’ which currently has 43 Million Views on YouTube. Barrie-James also toured with Del Rey worldwide. Barrie-James cut his teeth in the Scottish music scene before heading to Los Angeles to further his horizons. One local LA tastemaker site said of him, “comparisons to the likes of Elliott Smith. Such parallels are not to be taken lightly, but it is apt here”. His first band Kassidy were formed in Glasgow in 2009 and went on to record two albums. The band are marking the tenth anniversary of their first record Hope Street with a sold out show at Glasgow Barrowlands in December 2021. His career as a solo artist began in 2014 when he released his first single ‘Mary’ / ‘Paranoid’ under the name Nightmare Boy, with a follow up EP ‘Hate’ featuring the track ‘Chivalry Is Alive And Well And Living In Glasgow’ [the video for which was premiered by Pitchfork] coming the next year. His debut album, released under his real name, was titled ‘Cold Coffee’ produced by Rob Schnapf (Elliott Smith, Beck) and landed in 2016, with ‘Psychedelic Soup’ following in 2021. He may be keeping some fine company on ‘Strange Desire’, but this record is in truth all about Barrie-James himself. This third collection sees not only a natural and compelling development, a further emergence of a deftness of touch and an easily worn virtuosity. The roots of ‘Strange Desire’ lie in the best of the Country tradition but with trenchant lyrics and a languid delivery, Barrie-James builds a beautiful but occasionally dark and wistful atmosphere. This is an atmospheric and compelling collection that engages from the first moment. 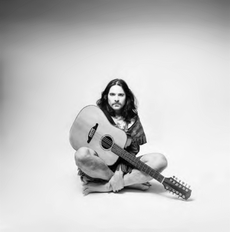