Finally, this wonderful soundtrack is widely available in all its glory replete with new artwork and remastered audio.

Wewantsounds is delighted to present one of Ennio Morricone’s best and least known soundtracks for the 1971 cult French crime film ‘Sans Mobile Apparent’ directed by Philippe Labro. This superb soundtrack featuring Morricone’s classic sound has never been widely available on vinyl save for a small, limited edition released under the film’s Italian title. The set has been remastered from the original tapes with lacquer cut by Frederic Alstadt (Mont Analogue) and gatefold sleeve designed by Eric Adrian Lee. Last but not least Philippe Labro himself has shared his experience in an exclusive interview with Jeremy Allen, discussing the making of the film, working with the Maestro (at only 34 years old) and his amazing career crossing path with Jean Luc Godard, Serge Gainsbourg and Jean-Pierre Melville. Musically, it is one of Morricone’s most beautiful scores featuring all of his trademark ingredients: a catchy theme, Alessandro Alessandroni’s unmistakable whistle, lush and dissonant orchestral arrangements plus an enormous groove which will please DJs and diggers alike. 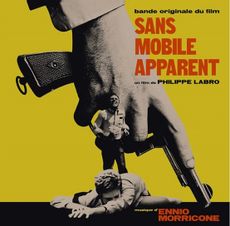