The Community Of Hope


limited 1 sided 7" single for PJ Harvey's 'The Community Of Hope', taken from her incredible 'the hope six demolition project' album.

the song is based in large part on a guided tour Harvey was given of the roughest neighbourhoods in Washington D.C. by a Washington Post reporter who had no idea who she was & the resulting lyrics have sparked a lot of controversy in the states. 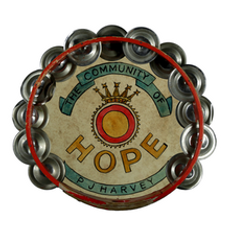