This limited edition boxset covers the boss’ second decade as a recording artist, featuring all five studio and live albums recorded for Columbia Records between 1987 and 1996 – all of which have long been out of print - as well as a 60pg book featuring rarely seen photos, memorabilia and press clippings from the period.

Additionally, the boxset also features two EPs – ‘Blood Brothers’ (available on vinyl for the first time) and ‘Chimes of Freedom’ – both of which are exclusive to the box. Furthermore, each boxset features a numbered Certificate of Authenticity. The audio is sourced from the highest-quality transfers of each original analogue album master. Additionally, two of the albums in the set have been pressed on double vinyl for the first time to further maximise audio fidelity. 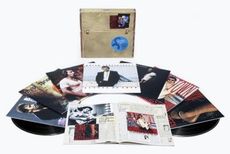