Possibly the most Kanye-est album yet from Kanye, this is a compelling record of contradictions from pop’s most fascinating figure.

The back-story is certainly one for our times - Ten days after releasing, 'The Life of Pablo', West tweeted that he would be releasing an album named after a games console. Then he was pictured in the studio with all his bessies. Then he took a picture on his phone and mocked it up quick to make the now infamous crappy cover art and came up with a new title based on the bible. It’s a stark and confusing picture of impossible celebrity and mental health that you can’t turn away from. “a candid tour of a troubled mind” 4/5 – the guardian, “like two different albums: an aggressive, dissonant one, and an empathetic, soulful one. Yet, those aren’t the two sides of Kanye, because those things exist in him simultaneously, all the time.” 4.5/5 - tinymixtapes 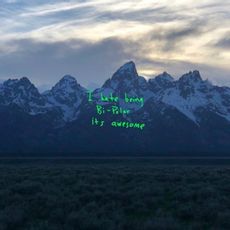