Alternate recordings of classic T REX songs. Telegram Sam was recorded in Denmark in 1971 as a pre-recording band run through. What you hear is T.Rex the group playing without the cameras of TV, or radio broadcast, or to an audience, but as a tight knit group getting on with it...the result is amazing. Baby Strange is a recording of an early television broadcast from the same time period. Both songs would appear the following year on the legendary “Slider” album. Taken from Marc’s own recordings and mastered in 2019, they are not mixed or remixed or tampered with in any way A: Telegram Sam (Alt. Version 1971) B: Baby Strange (Broadcast Version 1971) 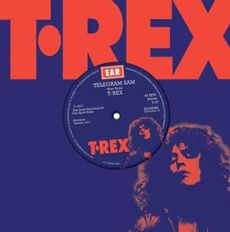