Continuing on with the ‘T.

Rex Alternative Singles Collection’ we have the global monster hit from 1971, ‘Get It On’! This version was an early run through with the band recorded in Los Angeles in April 1971. The b-side is a much raunchier version of the Electric Warrior track ‘Rip Off’ recorded in London the following month. 500 copies only on RED vinyl in new T.REX house bag. Also 500 copies only on 2 colour photo picture disc. All royalties go to The Light of Love Foundation (These recordings and many more were amongst the tapes stolen from Marc & Gloria’s home in 1977. Some of this material was returned to The Light of Love Foundation last year. 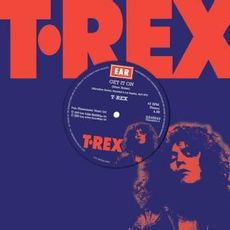