the Jamaican musical group The Maytals can be considered as one of the best known and most important ska and rocksteady groups of all time.

Frontman Toots Hibbert created an enjoyable piece of crossover reggae by releasing their album Knock Out! Following the recording of the album, Hibbert and original Maytals Raleigh Gordon and Jerry Mathias parted company. Knock Out! stands as a fitting swan song for one of the all-time great reggae groups. 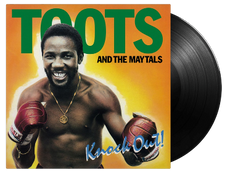