Follow us Follow us
Home  | out there  | ost : a haunting strip of marshland: ness - soundtrack by drew mulholland (rsd 20)


JON RECOMMENDS: "An odd mesh of field recordings, haunting manipulated acoustic work, and literal pieces of moss combine to soundtrack the folkloric tale of a nuclear power station located on the Suffolk coastline (as envisaged by Robert MacFarlane) - If there’s a better recording of moss released this year, be sure that I want to hear it".

Drew Mulholland’s evocative soundtrack to Adam Scovell and Robert MacFarlane’s file film “NESS”. The film is an adaptation of Robert Macfarlane and Stanley Donwood’s book, detailing a strange, folkloric vision of the Orford Ness nuclear testing facility on the Suffolk coast. “Because of its isolation, for seventy years (1913–83) Orford Ness was used by the Ministry of Defence for secret weapons-testing; from air-gunnery and bombing during World War One, to the environmental testing of British nuclear weapons in the 1950s and 1960s. It is, therefore, a landscape produced by a collision of the human death-drive and natural liveliness. Now it is a conservation site unlike any other, unnerving in its juxtapositions, where decaying ferro-concrete test laboratories are re-colonised by moss, bracken and elder, black-backed gulls build their nests in broken control panels, brown hares big as deer lope across shingle expanses cratered by explosions –– and the wind sings in the wires of abandoned perimeter fences. If you were to imagine a landscape co-designed by Andrei Tarkovsky, JG Ballard and Tacita Dean, well, you might begin to come close to The Ness. “Drew Mulholland knows how to listen to a place. How to lay ears to a landscape and catch the voices and utterances that surface into the skull. But fidelity is not his aim here ––and nor should it be with such a deceiving, treacherous site as The Ness. The tracks you hear are––in their distortions and manipulations–– truerto The Ness’s unsettlements and resonances than any others I know. They hover somewhere between field-recording and haunting. Acoustic elements have been worked over until they are scarcely recognisable, surviving scantly as hyper-mutated catalysts. Mulholland even used the place itself as the distortive force; he gathered lichen species found on The Ness, ground them nearly into dust, glued the resulting powder onto a length of cassette tape, played and recorded the lichened tape, then stretched the recording to ten times its original length– before splicing it and adding reverb and echo. “The resulting tracks are fabulously unfaithful to their origins on the untrue island. They bleep, shiver, rattle, quiver, shudder, detonate. There are footsteps, drips, the clatters of doors and minds being closed, as well is the warping cries of the Mellotron. Interference of several kinds crackles. Throughout, this remarkable soundscape echoes in its unsettling patterns the ‘environmental testing’ of nuclear weapons stress testing, vibration testing, temperature testing that occurred on The Ness under the Veil Of The Official Secrets Act.” Rob MacFarlane. Author of Ness, taken from the sleeve notes of “A Haunting Strip Of Marshland”. 500 only 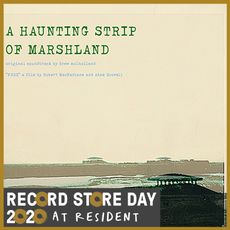