Or a chant in this case.“Antologia De Música Atípica Portuguesa” is back.Following two sold out volumes, the unplanned trilogy comes to a close with chants and hymns whilst continuing to merge music genres and presenting them as a world building concept. If the first two volumes were dedicated to work (“O Trabalho”) and regions (“Regiões”), it only made sense to close the trilogy with ceremonial music, connecting the real – each musicians’ creation – with a fantasied celebration of Portuguese folk, traditions, and ghost methods within these unusual anthems. If you’ve listened to Niagara before, you probably felt this whole ceremonial thing going on. A perfect opener then, for this volume with Niagara’s deep dive into proto religious-ambient music with “Paulo, Apolo e Pedro”. It sets the tone for the next 35-minutes of ethereal like songs. Either you listen to musicians working within their natural habitat (João Pais Filipe or Filipe Felizardo) or feel them exploring new areas in their realm (Niagara, Joana Guerra or Serpente), this third volume manages to combine eight of the best underrated visionaries working in current day Portugal. In the past, “Antologia da Música Atípica Portuguesa” created an imaginary folktale where current day creations could live with the idea of archive or fake-folk. This volume forgets the world building and actually lives in it. Because this is the real Portugal. This is our folk. These are our chants. Embrace the otherworldly. 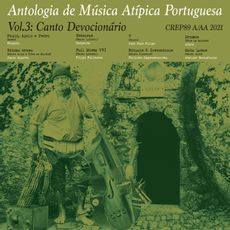