The Superceded Sounds of...


Improvised live at the Museum Of London in 2016 and now heading off into the uncharted territories of 2021.

This album began life four years ago when the trio of Strictly Kev, Robin The Fog and Chris Weaver were tasked by Jonny Trunk with providing an all-night immersive soundtrack for the mammoth ‘Museum Of Last Parties’ extravaganza in the Museum of London’s Torch Room. Setting up their vintage reel to reel tape machines, turntables and various FX units in the very shadow of the torch that became the icon of the 2012 Olympics, the trio set about creating a soundtrack worthy of champions.

Strange new worlds conjured from obsolete media, a vision of the future constructed live using nothing but vintage analogue technology and a sense of adventure. With a constant stream of revellers stopping by to lounge on moon-shaped cushions and enjoy this interstellar soundtrack being woven right before their ears, the trio amassed almost four hours of improvised oddities that night. It wasn’t until the spring of 2020 when they suddenly each found themselves at home with all plans cancelled and a LOT of spare time that the tapes were resurrected and the album started to take shape.

The album is presented in a second edition sleeve, redesigned by Strictly Kev who explains, “After the first run of LPs with the Heliophore foil covers sold out in 25 minutes I started looking for other options for a repress that would equal the first, seeing as the stocks of foil were now depleted. I chanced upon a prism effect card which gives the illusion of depth and was a new addition to a card-maker’s stock. Inverting the original design and printing white onto black, I gave them to Jonas Ranson at paperHAUS who (again) expertly screen printed the covers - front and back this time - before they went off for assembly. As with the cover, we decided on a silver and white hybrid moon surface effect for the vinyl, hopefully making the repress just as covetable as the first. 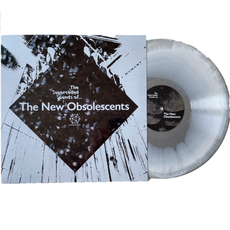