Jean-Hervé, Zappi and Steve Pittis recorded their interpretations of Radio Music independently in 2007 and 2010.

They all felt it important to keep to the score as much as possible, given the obvious ambiguities of having to adapt it from Cage’s original 1956 score. These recordings were released as a 10” vinyl EP and sold out instantly, so here they are on CD format with some extras. During “lockdown”, it was obviously impossible to get together and perform, so an “ensemble” version culled from our takes has been mixed and is included here. Also included is a version of 4'33" recorded live at the amphitheatre in Pompeii. This is a bonus track, as it's obviously not part of the Radio Music sessions. For this reason, it is presented on the sleeve as a "penalty track" in anticipation of the inevitable criticism it will encourage. 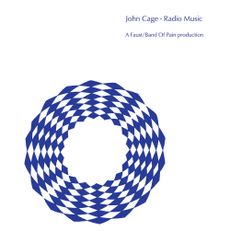