Import/Export: suite for global junk is inspired by the pioneering composers and musicians whose use of unconventional objects has created a groundbreaking repertoire for percussion over the last century.

These range from institutional greats such as Schaeffer, Stockhausen, Cage and Varese, to the Babaton bendi in Tanzania and the Zawose family in Africa whose use of these instruments derives from a necessity to make music based on the recovery of the materials around them. Nonclassical were fortunate to have contributions from some leading names in Electronica, including: Matthew Fairclough, Murcof, Martin Parker (aka tinpark), Medasyn, Richard Lannoy and Joby Burgess himself. Powerplant is the multimedia group led by young genre-trashing percussionist, Joby Burgess – follow up the debut release 'Electric Counterpoint' (remixes of Kraftwerk and Steve Reich for xylosynth, percussion and electronics) with the groundbreaking commission 'Import/Export: Suite for Global Junk' from Gabriel Prokofiev. This CD album release comes complete with a DVD containing a full performance of the piece and interviews from both performer and composer which explicitly shows how the music is performed live; no laptop-gazing in sight! The rich sounds and inspired rhythms of these four junk objects provide fantastic material for remixers. 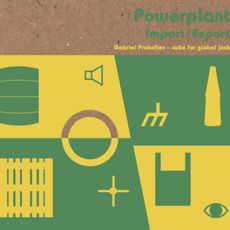