Despite the name, it was a solo project which relied heavily on computer generated vocals.

The name was derived from a play on words, combining the terms houseboy, house of boys, boys' choir, and Threshold House, which was Coil's own label. "Form Grows Rampant" is the soundtrack of a film shot by Christopherson (a video capture at the GinJae Vegetarian Festival in the south of Thailand) and his first major musical project since the tragic death of John Balance and the subsequent demise of Coil. The music is a suite of lengthy dense atmospherics that combine shuddering electronics with sampled vocals, eerie digitalia, buried melodies and sinister undercurrents hinting at a gleaming heart of darkness, with a joyful melodic progression that sounds positively triumphant towards the end of the disc. It's both Coil-esque and quite different, and undoubtedly is the worthy successor of the legendary group that Christopherson created with his partner John Balance. 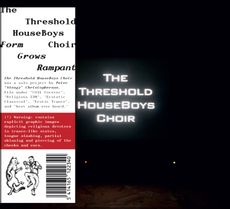