The Pavilion Of Dreams (2022 reissue)


Produced by Brian Eno in 1978, The Pavilion Of Dreams stands toe-to-toe with another minimalist masterpiece also released that year, Steve Reich’s Music For 18 Musicians.

Budd’s gorgeous pieces reveal a lightness of touch that draws the listener in, while sublime voices float in and out as if in a recurring dream. Featuring saxophonist Marion Brown and multi-instrumentalists Gavin Bryars and Michael Nyman, The Pavilion Of Dreams remains a master class in exquisite timbre and shimmering texture. The Pavilion Of Dreams was both the final release on Eno’s Obscure imprint and a transition point towards his seminal ambient series. This first-time reissue is recommended for fans of Ryuichi Sakamoto, Jon Hassell and Mark Hollis. For five decades, Harold Budd stood on the forefront of the West Coast avant-garde. Born in Los Angeles, he studied with Schoenberg-pupil Gerald Strang and began teaching at CalArts in 1970. While searching for his own voice, he was influenced as much by abstract expressionist painters as by John Cage and Morton Feldman. In his work, Budd brought delicate, slowing-moving melodies to the foreground – creating a new musical language based on “eternally pretty music” and smooth surfaces. In the early ’70s, Budd started an extended cycle of compositions that would comprise The Pavilion Of Dreams. For Budd, the album was a signpost for a new direction in thinking about music: “The Pavilion Of Dreams erased my past. I consider that to be the birth of myself as a serious artist. It was like my Magna Carta.” 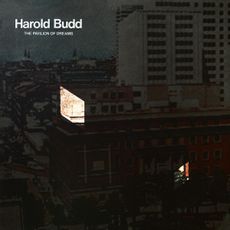