Antiphony of the Trees


Here, for the first time she focusses solely on the recorder, taking inspiration from the sound of birdsong which cuts through the crisp air of the fen valley where she lives.

Armed with bass, tenor, alto and double recorders, layered fragments are transcribed and re-interpreted from birdsong into a minimalist solo chamber music. From slow chordal drones, breathy and raw in the chilled air to the sound of rapidly beating wings, she plays all the parts of all the birds: the hoarders, the gatherers and the sacred birds. The avian voices which dominate the sky are echoed and the reply comes from a new voice. The antiphonal calls and responses of feathered creatures are reflected and mimicked through oscillating difference tones, minimal use of delay and organ-like polyphonic passages. Not wanting to be explicitly bird-like the tracks were composed and improvised by transcribing and playing along with the wild avian voices which echoed down the chimney pipe and through wide open doors and windows. Antiphony of the Trees was recorded in 2021 in Laura’s kitchen which she has repurposed as her main studio over the past 2 years. Her usual methods of exploring location based acoustics were not possible, she turned inward capturing and reinterpreting the songs of feathered travellers who pass through her garden and inhabit the nests, landscapes and structures of the farmyard and churchyard on either side 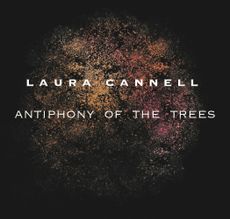