Stomu Yamash'ta's ultra-rare cult 1971 LP is reissued for the first time, it is a deep, cosmic, at times ambient performance recorded live and featuring two other Japanese legends: Takehisa Kosugi from the Taj- Mahal Travellers and jazz pianist Masahiko Satoh.

Remastered from the master tapes with original gatefold artwork, obi and new introduction by Paul Bowler. Recorded live at Yamaha Hall in Tokyo on April 18, 1971, the all-night concert was recorded in front of an invite-only audience consisting of friends and musicians. Yamash'ta had Satoh on keyboards along with Fluxus master and leader of the Taj Mahal Travellers Takehisa Kosugi on violin and Hideakira Sakurai on electric shamisen. Edited down to fit two sides of an album that will become 'Sunrise From West Sea', the performance is both hypnotic and ethereal. It starts with Kosugi's distinctive electric violin and develops into a deep, spiritual free form conversation between the four musicians, giving them all the space, they need to freely improvise and interact with each other, mixing electronics, percussion, electric organ and shamizen without ever clashing. The interaction alternates between quiet, tranquil Eastern meditations and more paced parts, fuelled by Yamash'ta's extraordinary percussion playing. Yamash'ta never reached the creativity heard in 'Sunrise From West Sea' again. The album was recorded during one of the most fertile periods in Japan where such groups as Les Rallizes Denudes and Taj Mahal Travellers and jazz musicians like Masahiko Satoh and Yamash'ta were revolutionising the Japanese music scene. 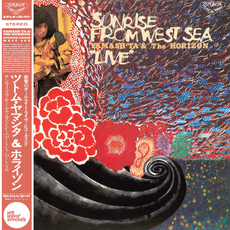