Emerging from a thick spiralling haze, is the debut album from Mystic AM - a new project from Rod Modell and label founder Ario Farahani.

Conceived as an immersive fictional soundtrack piece, the release tells the story of a traveller, some centuries ago, and the rather intense metaphysical experience he unexpectedly stumbles into whilst taking shelter on a hot desert night at Zein-o-Din Caravanserai, near Yazd in Persia. Dusk envelopes the vast barren landscape as the protagonist enters the ribat, treasures of woven silks, ornaments and exotic spices glint under the flickering oil lamps, swirls of perfumed vapour dance mesmerisingly in the darkness. As the music unfolds the events of the passing day quickly melt away, and the unsuspecting traveller is plunged into an otherworldly dimension. Utilising an extensive collection of old Iranian records as source material, the album is an intoxicating mise-en-scéne of whispering melodies, undulating rhythms, and atmospheric sound details. An active buyer of old Iranian music, Ario began extracting and editing samples from the records acquired during frequent trips to Iran over recent years - during which the mood and flavour of the project began to crystallise. Once handed over to Rod for further processing and arrangement, the album took its final shape - an endless tapestry of sights, sounds, and memories that fade mysteriously into the night’s reverie. Textures seep into one another in washes of colour, and hallmarks of classical Persian sounds filter through - the slow stroll of the daf, scintillating runs of santoor, and solitary lines drifting out of the kamancheh. Bridging the realms of the real and the imaginary, the collaboration signals the first contribution to Mystic AM’s enigmatic concept. 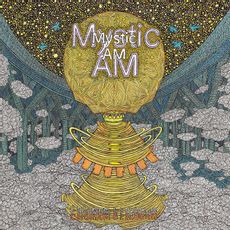