An enchanted exploration of unusual source synthesis, electroacoustic arrangements, and sound found in foreign environments, Advanced Myth is its own cosmos expanding and contracting in real time. Advanced Myth coincided with the creation of the Liverpool-based musician’s Dialect moniker, marking a more permanent uncoupling from the “frontman” dynamic Hunt wrestled with as part of Sophisti-pop band, Outfit. Happily unmoored ever since, Hunt has built a broad oeuvre with a quiet confidence across several album, including Gowanus Drifts (2015), Loose Blooms (2017), and Under ~ Between (2021), his debut for RVNG Intl., and its companion piece, Keep Going…Under. “Doing something as abstract as Advanced Myth was a real change for me at the time and turned out to be something of a new start,” Hunt explains. “The band had a studio set up in a disused block of flats just across from the big, shared house we all lived in, and I started to record there by myself a lot. At some point in 2013, I realized I’d amassed a huge collection of miniatures and a few larger pieces which had nothing to do with what the band was doing. Dialect became a way to gather these ideas together and find my own voice.” Steering towards lesser-explored musical terrains wasn’t new to Hunt even then; he’d toured the UK and Europe underground in various projects since his teenage days, and contributed to large ensemble performances of work by the likes of Terry Riley and John Cage. However, Advanced Myth was made amidst a correlation of events that set him on a fresh trajectory, including a new relationship (with his now-wife), the winding down of Outfit, and time spent living in New York City. Hunt says that he hears “a lot of beauty and excitement, but also the sadness and struggle” of NYC in Advanced Myth. Having left Liverpool to rent an apartment there in the fall of 2014, he immersed himself in the library of critical theory and art history books that its owners had amassed, alongside reading materials like the diary of Hercule Barbin and satirical short stories like The Nose by Nikolai Gogol. This almost academic absorption of ideas contrasted with the time Hunt spent volunteering at a homeless shelter, where hardship was on full display and privilege checked at the door. It’s perhaps no surprise then, that although a largely meditative listen, Advanced Myth oscillates between moments of shimmering lucidity and corrosive washes of noise. Take the improvisational zither session he recorded one morning, sections of which appear on the almost folk-like “Hung Rose” and “Unanswered Prayers.” On the former, this chiming instrument twists unbridled until submerged by a discordant hiss, the sound of traffic, and the elevated ambience of a sporting event. On the latter, though, its delicacy and poise is bolstered further with the addition of strings and clarinet. Advanced Myth is a coil of both reflective and reactive composition. In the absence of conventional structure, it’s these shifts in spirit that provide Advanced Myth’s emotive signposting, inspired in part by the likes of Laurie Spiegel’s The Expanding Universe and Mother Mallard’s Portable Masterpiece Company, European kosmische, but also purely textural sonic ideas from ‘70s and ‘80s GRM through to contemporary ASMR. In truth, though, Advanced Myth is to be received as its own, and as a whole. Tracks, as they are, don’t start or stop, instead bleeding into each other, in support or rebuttal, gently persuading the mood into the shadows. It’s a record from which you can sonically draw lines to everything Dialect has gone on to, yet it also stands alone as a document that’s relative tranquility doesn’t mask the sense of excitement from an artist standing at the precipice of new creative boundaries. 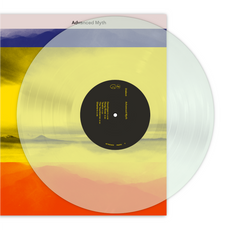