Th Da Freak is the project of Thoineau Palis, a young musician from Bordeaux who is obsessed with 90's slacker rock and the likes of Pavement, Sonic Youth or Sebadoh, which he mixes with dream pop, garage rock and bedroom pop influences.

He's extremely productive (2 albums, 2 EPs and a double album of B-sides since 2017) and quite active in the city of Bordeaux, where he started a collective of musicians dedicated to promoting the local scene through concert organisation and cassette releases. This album is the first one that was recorded collectively as a group, with the musicians who have been accompanying on stage since the beginning. It's called 'Freakenstein' and was influenced by Palis' interest in classic Sci-Fi and Horror films. 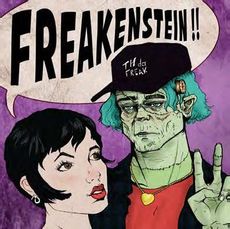