"Josefus is a name that every self-respecting record collector and 60’s rock enthusiast can appreciate.

They were raw, uncompromising rockers that played their own unique brand of psychedelic “amped-up” blues rock. Their story is one of hardship and struggle, having lived the life of true hardcore underground rock musicians fighting the establishment during the tumultuous late 60’s and early 70’s. Their first album, “Dead Man," has firmly etched itself into the consciousness of thousands of people and today an original copy can fetch up to $1,000. Recordings of this band are scarce, especially those of any sonic quality, so when we discovered there were unreleased studio sessions dating from the 70’s, we were very excited and rightly so! These lost gems smoke! Painstakingly restored and mastered with state of the art technology, we can now offer up these historic and priceless recordings on a format that will do them justice. The rest of this excellent release contains amazing professional live recordings capturing the band during more recent outings (2004 and 2012) and show JOSEFUS "“Not Dead Yet: Unreleased 1978 Studio Sessions & Live” limited second pressing Format: LP + insert Cat Number: SRLP0005 Released: 18 Sept Price: £18.99 (LP) Label: ShroomAngel Records Style: Hard Rock, Stoner Rock UPC: 6591311300058 them to be as raw and savage as they were in 1969. A welcome release by this venerable band from Houston, Texas. Long Live Josefus!” 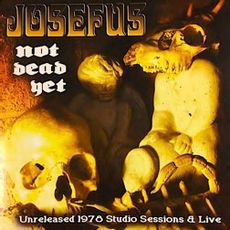