The United States of America have always been considered the land of opportunity - if it weren't for the barriers of racial segregation that affect Mexican-Americans as much as African-Americans.

Although racial segregation was abolished by law, it still exists in a subtle way and sometimes even in an offensive way until today. Therefore, 'The Right To Rock' owns current references, including musical roots of famous artists like Herb Alpert, Carlos Santana and Los Lobos! This compilation documents the musical rebellion of Latin American society in the USA in the 1950s, especially of the young people who proudly called themselves 'Chicanos' and gave new meaning to the former insult. After the 'Riots' in California during World War II, the movement was the first liberation in the 1950s - and this was achieved exclusively through music; because Chicano rockers like Ritchie Valens and Chris Montez made themselves heard worldwide and thus culturally paved the way for the constantly growing Chicano movement, which acted similarly to the civil rights movement of African Americans. Hippy Hippy Shake If A-Wop-Bop-A-Loo-Bop-A-Lop-Bam-Boom! from Little Richard's 'Tutti Frutti' is regarded as the rock 'n' roll battle cry of a whole generation, Chan Romero's Hippy Hippy Shake embodies the parole of the Chicanos in America of the '50s. This statement describes the concept of this extraordinary compilation. Admittedly, this is also about rare recordings that are important for the collector. Furthermore, these songs describe the rebellion of young Latinos, Mexicans and Chicanos in those days. The focus is on the rougher side of rock 'n' roll, songs that were written on both sides of the Mexican-American border, but which are not opposed to each other. Just as US-American rock 'n' roll influenced Mexico, so it resonated back, Mexican style. Artists from both countries developed their own but common Mexicano/Chicano rock 'n' roll culture. This describes 'The Right To Rock' with famous artists like Trini Lopez, Freddy Fender, Chris Montez and last but not least Ritchie Valens, but also with many less common names like Tony Casanova, the Carlos Brothers and Chan Romero, who are in no way inferior to the greats. Among the Mexican artists in this compilation we find names that were extremely popular in Mexico at the time, but remained almost unknown in the USA and Europe. We are going to change that! Los Xochimilcas, for example, proves that Mexican bands did not only create their own creative style. Their music is as unusual as their name: on the basis of a thundering slap bass with crashing drums, mariachi trumpet and accordion cavort, played with real enthusiasm, a lot of tempo and humor: a highlight of this compilation! Just like the Good Rockin' Tonight adaptation of Los Gibson Boys, one of Mexico's top bands of the time, clearly influenced by the young Elvis Presley. This is how Rockabilly goes Mexican! The CD in a digipak comes with biographies of each artist, a detailed introduction to historical, cultural and political backgrounds, as well as many photos and illustrations in the 36-page booklet. 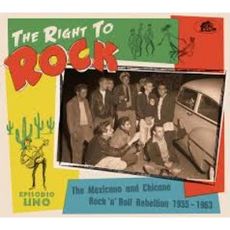