99 GENRE: ROCK ‘N’ ROLL, ROCKABILLY BARCODE: 4000127140135 pairing Penny Loafers And Bobby Socks and Rocket; the follow‐ups Cotton Pickin’ Rocker, Little Turtle, and We’ve Had It, and three ABC gems that didn’t see light of day at the time. Bennett, whose sparkling lead guitar was a primary ingredient in his band’s sound, and his crew moved over to Jack Gold’s New York‐based Paris logo in 1959; that’s where their Bayou Rock and What The Heck emerged. The ’65 ABC one‐off Well Dressed Man proved the reunited Sparkletones had no problem keeping up with the times. Pull on your Black Slacks and get ready to rock with Joe Bennett and The Sparkletones! 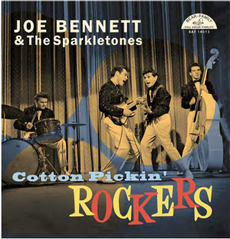