when you can name john peel, kurt cobain & kim gordon (who provides the liner notes for this issue) among your die-hard fans you can safely be called an essential part of underground rock & ‘odyshape’ definitely still holds its own as a forward thinking & keenly experimental avant-pop/punk album. simple yet playful & satisfying guitar & string melodies, in the sonic landscape of lou reed & john cale’s shared dynamic on early velvet underground records, share a beautiful melodic jumble with sparse & textural piano motifs. plaintive & childlike vocals, reminiscent of those on white noise’s debut album, sing oblique & disarming tales of the modern female experience set in an isolated & often harsh & unfriendly world, while woodblocks, cymbals & tom-toms rumble along with the quirky, ever shifting bass to create a vaguely unsettling yet original & driven rhythm section. guest turns by soft machine’s robert wyatt & pil’s richard  dudanski only add to the legendary status of this intriguing recording. 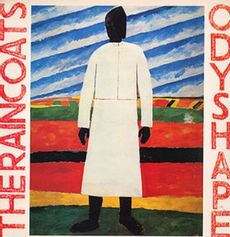