after a string of very limited 10”s, the eagerly anticipated debut album from the london 4-piece finally lands.

formed from the same west london scene that has given rise to the likes of laura marling, jay jay pistolet & noah & the whale but this lot have a much broader, more colourful spectrum that they build their lively, folk/bluegrass songs from. marcus mumford built mumford & sons after his long standing position as laura marling’s drummer / harmoniser began to earn him praise from all who saw them play live together. his battered & raspy voice soars with emotion over massive swells of country-tinged, banjo-laden orchestral pop. lovelorn lyrics filled with hope, anger, fear & every passionate extreme in between, are welded to the tight arrangements & backed with 4 part harmonies. uplifting, joyous songs that will undoubtedly appeal to fans of any of the aforementioned or sons of noel & adrian, fanfarlo or the leisure society. “an enchanting experience, a unique discovery” – guardian, “a perfect album for the autumn months” 7/10 - thisisfakediy. 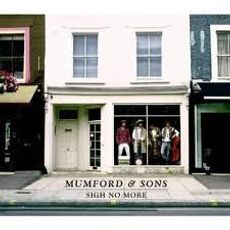