derry recommends: "i happened to be browsing in a charity shop on my day off a couple of weeks ago & saw a copy of this album.

as well as wondering why on earth anyone would get rid of it, i realised that i’d somehow never managed to buy a copy myself. having put that right, ryan’s second solo album has rarely left the stereo since, mainly because my one year old son only has to hear the classic ‘pinball wizard’ referencing opener ‘new york, new york’ (not that one, thankfully), or , even more so, second track ‘firecracker’ with its steve earle country meets rock fast paced guitar riff to get very excited indeed & start dancing like a maniac. small boys dancing aside, this is a great album from start to finish as ryan acknowledges all his influences in one go from the stones to van to stephen stills & neil young to the band & gram parsons. if you only buy one ryan album, it’s probably still ‘heartbreaker’ but, honestly, that would be like only buying one album by any of the people mentioned above. if you’re a fan of americana or classic 70s rock, you need this album in your life. even one year olds know that." 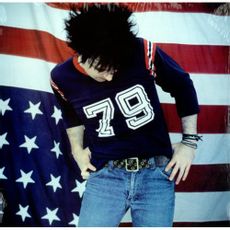