ras michael & the sons of negus

michael sticks pretty close to the traditional on this set, although on other releases he has grafted mainstream reggae, funk, rock & even electronica into the mix. the overall effect of the slow, pronounced drum patterns is definitely soothing & trance inducing. the most striking track is 'rise jah jah children', which builds around the refrain to 'the lion sleeps tonight', a big international hit for the tokens. 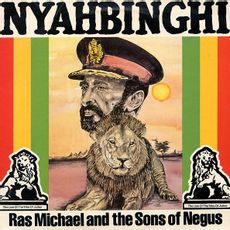