Echo And The Bunnymen

recorded at eden studios in london & rockfield studios in monmouth wales, crocodiles was produced by bill drummond & david balfe, it is heralded as one of the 'classic debut albums of all time'. ian broudie had already produced the single 'rescue' & the albums cover & music both reflect the imagery of darkness & sorrowfulness contained within. this was much lauded at the time with nme describing mcculloughs lyrics as being "scattered with themes of sorrow, horror,& despair, themes that are reinforced by stormy animal/sexual imagery". 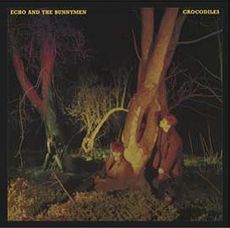