the awe inspiring live sound of the birthday party threatens at all points to leap from the speakers & throttle innocent bystanders.

stitches together tracks from a london date in 1981 & a german show in 1982 (plus a ringer cut from athens - a version of the stooges’ ‘funhouse’). given the sometimes (though intentionally) unclear or unexpected mixing of party songs in studio, hearing everything via in-your-face stun methods brings out the abilities of the band all the more, especially pew & his vicious bass work. songs like ‘the dim locator’ & ‘king ink’ cut closer to the bone as a result. ‘nick the stripper’, amazingly, is even more viciously sleazy than the original, while ‘the friend catcher’ seethes with a creepy, frigid energy. 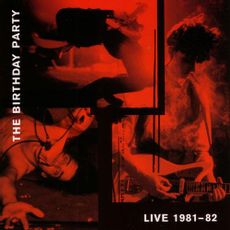