machinedrum’s beats display an unrelenting stream of versatility – whether he opts for classic sped-up breaks or meticulously programmed hits, the innate, fluid sense of rhythm gives his tracks a drive other producers sorely lack. but this isn’t even the strongest card in the producer’s hand. whether lightly dusting the tracks with ambience or layering up synth melodies, the cutting edge & often alien sounds mark territory stalked by he & kuedo alone. envisioned as an audio map of an imaginary city he saw in years of recurring dreams, the album’s progression creates the awe inducing & estranging  feeling one would anticipate, reconceptualising classic rave sounds as the only nostalgic link to the past. 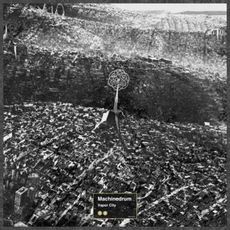