Future Of The Left


Future of the left are contractually obliged to tell you that their fourth studio album 'how to stop your brain in an accident' will be released on 21st October 2013 through prescriptions following their 2012 welsh music prize award winning album “the plot against common sense”.

Recorded by Charlie Francis (R.E.M, The Noisettes, Sweet Baboo) at the prestigious Monnow Valley studios in Monmouth, and mastered by Sean Magee at Abbey Road Studios, the album is accompanied by mini album, 'human death', which was recorded during the same album session. It is available on the same release date and sold seperately. The 6 songs on this are by no means lesser in quality. They are album worthy but simply did not fit on the record. After an extremely prolific period of writing the band wanted to record as much as possible, hence these additional songs in the form of this extra mini album. 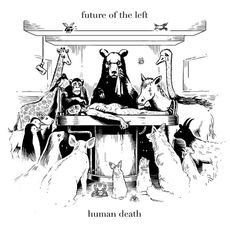