one of the most refreshing, thrilling & genuinely unique songs we've heard all year comes from this 17 year old from oldham, near manchester (although he apparently wrote this when he was just 14!).

a clammering, cacophonous, raw, eneregtic track that makes us hungry for more form this intriguing young man. "majestic, freakishly savant-ish song...a wondrous, sub-two-minute blast of shambolic, lo-fi piano rambling & smashed cymbal fog that would have been entirely at home on Elephant 6 in its heyday, recalling early of Montreal, Elf Power & a Joanna Newsom-like way with words & intonation rendered in the wiry voice of a manic teenage boy. he sings as if playing the piano from Big, sprinting up and down the keys while yelping at least one word for every note. There's so much raw, unadulterated delight here" - pitchfork. 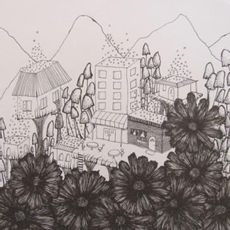