an impressive development & broadening of their sound away from the more pop punk edged indie rock that defined their debut, although there are still some punky nuggets along the way.

Swearin’ is fronted by Allison Crutchfield, sister of Waxahatchee’s Katie Crutchfield. The twin sisters were previously both in the band PS Eliot together. Swearin’ also features Keith Spencer (the Waxahatchee drummer) playing bass. Sticking to their DIY guns, the band holed up in their new hometown of Philadelphia & recorded, mixed & mastered this album themselves. "everything a punk record should be; abrasive, aggressive, occasionally a little gauche, but with an emotional core that’s unmistakeable, and that elevates Surfing Strange from a enjoyable album to a genuinely gripping one" 8/10 - lineofbestfit. 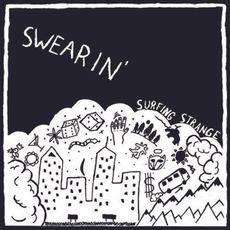