breaking the convention of a traditional live album, 'spaces' was recorded over the course of 2 years in different locations & captures frahm at his spontaneous, improvisational best.

the berlin-based contemporary composer has built a steady reputation for his intimate, poignant piano recordings, yet they have so far only shown a fragment of what to expect from his concerts. frahm’s heart lies in improvisation, in the magic of a moment where, inspired by the space & the audience, his fingers can create new compositions loosely based around his familiar melodies. this ode to the joy of live performance is referred to by frahm as a collage of field recordings rather than a live album. it includes surprise moments such as the sound of him banging a toilet brush on the piano strings to create a dub-sounding track. elsewhere we find him combining beautiful synth textures with his mesmerising, textural piano playing. 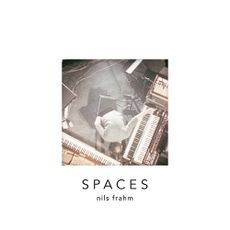