The Black Twig Pickers & Steve Gunn have travelled in the same circles for years, but it wasn't until the first Hopscotch Festival in Raleigh, NC that they got the chance to play together.

The Twigs’ Mike Gangloff & Nathan Bowles convinced Gunn to join them in a rendition of 'Lonesome Valley', an old traditional spiritual, during a laid-back day party, which was received with overwhelming enthusiasm. Steve held down guitar, Nathan sang & played banjo & Mike laid into a fiddle & sang harmony. Although Gunn has joined the Black Twig Pickers during live performances since, this 7” is the first time they have appeared on wax together & they celebrate the event by reprising 'Lonesome Valley', with Isak Howell wailing on harmonica. The flip side is a two-fiddle scorcher, with Gangloff joined by Sally Morgan. The duo take a run at the Virginia-North Carolina border tune 'sweet Little Julie', a dance favourite in its home territory. This single, presented with a letter-pressed cover made by Morgan, is just one more example of the singular approach to old-time music by the Black Twig Pickers. 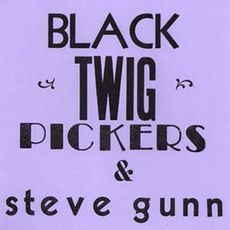