tinariwen strip rock down to its basic building blocks of rhythm, guitars, & voice. on ‘amassakoul’ they stick to what they do well, keeping the music raw & emotional. while there are similarities to the desert blues of mali, these tuareg nomads from the western sahara are as much a rock band as the stones at their best, capable of conjuring up magic with a guitar riff or lick. oftentimes, the music has the same bluesy, undulating, hypnotic rhythm of a camel crossing the sand, as on ‘aldhechen manin.’ but they can also crank the amps & unleash something to tingle the spine & feet, which they do on ‘oualahila ar tesninam,’ as frantic & primal a piece of rock & roll as you're likely to find. 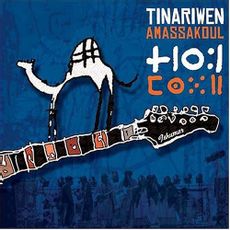