'African Piano' was a highly influential album & it has lost none of its power - as can be heard on this CD reissue & new 180g vinyl album.

Both versions are released for the first time under the name Abdullah Ibrahim instead of the pianist’s original ‘Dollar Brand’ sobriquet. Sometimes a musical message is so urgent that questions of recording quality are almost beside the point. Informally recorded in 1969 in a noisy club - Copenhagen’s famous Jazzhus Montmartre - the flavour of this album is "documentary" rather than luxuriantly hi-fidelity, yet the essence of Abdullah Ibrahim’s communication comes through loud & clear. We are drawn into the robust rhythms of his solo piano style, as he reexamines the history of jazz from a South African perspective, with echoes of songs of the townships & vamps that hint of Monk & Duke & much more. 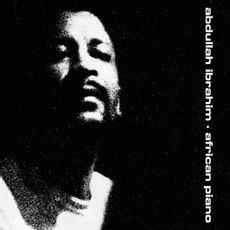