the LA-based neo-post-punk collective have become one of music’s most exhilarating young acts & The band's sophomore is as equally kaleidoscopic as their debut, if more focused.

it retains all of the touchstones that made their previous release so engaging continues to deliver their catchy, buoyant melodicism. 'Spreading Rumours' features a set of supremely catchy songs that walk the line between the Flaming Lips' bubbly psych rock & Smashing Pumpkins' '90s alt crunch. However, where Smashing Pumpkins built their sound around yearning, often darkly emotional lyrics, Grouplove make joyful, positive-minded rock. These guys are permagrin fruitboots who play with such frenetic optimism you can hear the smiles in their voices. 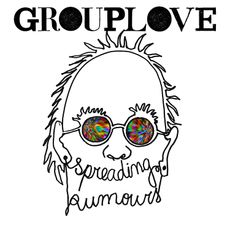