Imagining a world where This Heat & Can developed their sound in the Bay Area rather than Europe, thee oh sees mastermind John Dwyer puts down the guitar in favour of an arsenal of synthesisers.

Propulsive beats & synthetic veneers coat laser-guided melodies reflecting off shiny metal surfaces while instrumental interludes pop in & out like breaks in the asteroid belt on Dwyer’s latest bit of cracked pop alchemy. While the sound is more electronic, with churning synths weaving their way around ramshackle beats, the album has an analogue, handmade feeling that places it far from the lockstep polish of dance music & feels distinctly broken, but in a great way. more than anything it demonstrates Dwyer's way of taking a sound & infusing it with a veneer of sweat & sunshine, allowing his music to shine through despite its grimy, lo-fi patina. 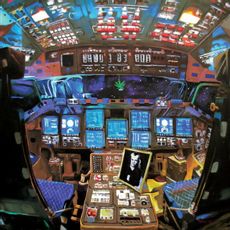