‘a beard of stars’, a more accessible & streamlined outing than previous tyrannosaurus rex releases, turned out to be bolan’s farewell to his late ’60s hippie duo & was the first to feature photogenic new sidekick, the bongo-playing mickey finn.

the tie-in single, ‘by the light of a magical moon’, was as charming as its title, & the entire set is woven with mysticism & melody. ‘a beard of stars’ also marked the first real stirrings of electricity, with album closer ‘elemental child’ clocking in at five-a-a-half-minutes, thanks to some extended hendrix-style guitar soloing. a bonus disc of outtakes, many previously unreleased, has been handpicked by t. rexpert clive zone - who also provides memorabilia for the booklet. 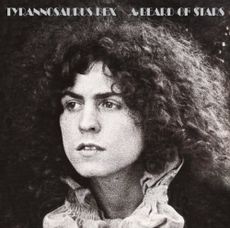