A WORLD LIT ONLY BY FIRE


Since their 2010 reformation, new material has slowly but very surely been both discussed & worked on, although Justin K Broadrick stated that the eagerness to release new music should not be overcome by the bands new found popularity.

This album, like the 'Decline & Fall' EP that came before it, have been works in progress for almost 2 years. "The music speaks entirely for itself, this is pure Godflesh, as the concept was originally intended; minimal, brutal, dissonant, driven by machines yet paradoxically dominated by organic & harsh down tuned guitars & bass, clean dub inflected vocals offset against harsh raging minimal shouts, & this is not to forget the worship of the omnipresent groove".GODFLESH is Justin K Broadrick's yin to jesu's yang. 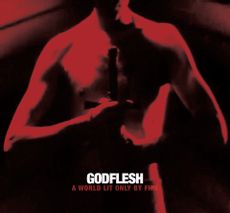