If you love your prog-rock horror music, this will be right up your alley - For the first time ever on vinyl, 22 tracks including not only the full score to 'Absurd' but also all of the cues used in the legendary splatter movie 'Pieces'.

Exclusively re-mastered for vinyl from the original CAM tapes,  with Art by Wes Benscoter. Death Waltz Recording Company is proud to unleash another cult classic from the video nasty era with Carlo Maria Cordio’s musical score to Joe D’Amato’s notorious ABSURD (aka ROSSO SANGUE). A pseudo-sequel to ANTHROPOPHAGUS, the film reunited D’Amato with George Eastman, star of the previous film, and brought the action from Greece to America where the near-invincible Mikos escapes from a hospital to go on a typically gory killing spree. Using drills, band saws, axes, scissors, and an oven, Mikos terrorises the kids of an American (Italian) family until he gets his inevitable comeuppance courtesy of a drawing compass. Carlo Maria Cordio’s score is centred around a versatile seven-note piano riff that gets an amazing amount of use without ever feeling too stale or repetitive. Cordio augments the riff in interesting and varied ways, sometimes going down the Goblin route with the big and impactful percussion and the funk beats, with a healthy dose of synth, or going for a bit of a chilled out proto-LETHAL WEAPON tune, with noodling electric guitar. Tension is the order of the day much of the time, with synths, an electric keyboard, and a snare drum being Cordio’s weapons. 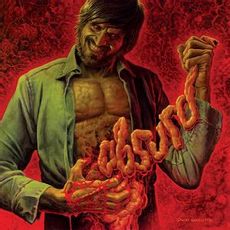