kicking off with what is undoubtedly one of 2015's best pop tunes, ‘Restless Year’, the rest of the genre melding album veers between this fizzing energy, 90s indie rock, sunshine-y 80s pop & the snarl of 70s punk.

an expansive, dramatic, emotional, joyful, bold exploration of sounds, it feels like you're experiencing ezra's own constant search for a new definition of himself. switching from the sinewy jubilance of ‘Hark! To The Music’ to the wistful heart-ache of ‘Ordinary Life’, from the power-pop snarl of ‘Tip Of The Match’ to the wracked country blues of “One Day I Will Sin No More”, The waterfront covered marks Furman out as a true original, tapping avenues of music that most others have left alone, or wouldn’t have the guts to emulate. "the restless sound of a genuine one-off in a generic world....Furman’s skill lies in rearranging various influences from his record collection in a way that sounds fresh & artless" 4/5 - guardian. 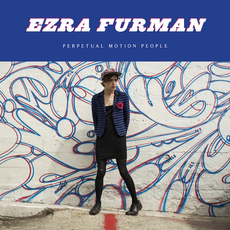